Online games from the Virginia Lottery 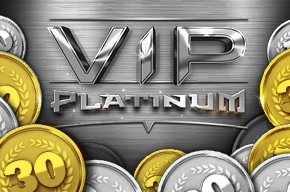 Precious metals and prizes abound in VIP Platinum. Try to match your tickets to the Winning Numbers and you could hit the mother lode! Collect platinum coins to unlock extra reveals, and gather gold coins to gain an even bigger prize. Go heavy metal and you could win up to $60,000!

Each VIP Platinum game features 7 Winning Numbers, up to 25 Your Tickets, and an area for collecting Platinum Coins. Players may purchase sets of 5, 10, 15, 20, or 25 tickets per game. Each ticket features either a number and a prize amount, or a Platinum Coin symbol.

Match any of the Winning Numbers to a number on Your Tickets to win the prize shown on that ticket. Reveal 3 or more Platinum Coins to play through Extra Reveals once all tickets purchased have been revealed.


Odds per Game are based on maximum possible tickets played. Top prize is based on highest possible price point played.

Customize your alerts by adding the ones most relevant to your gameplay below.

If you have purchased a Subscription or entered a Lottery promotion in the past year, you are already a member and may login.