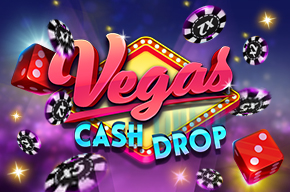 Roll the dice with Vegas Cash Drop! Make a cluster of three or more of the same symbol to win a prize. If you make a cluster while a multiplier is shown, your Multiplier Total will increase. Find three Free Play Symbols to unlock 10 free plays, or reveal three Bonus Symbols to enter the Wheel Bonus Game. Entertainment galore is at your fingertips!

Each Vegas Cash Drop ticket features a play area with 20 symbols, a Prize Chart and a Multiplier field in the Winnings area for tracking the Prize Multiplier for each game.

Reveal three FREE PLAY symbols to automatically play through 10 free plays of the play area and winning prizes as outlined above.

Odds per Game are based on maximum possible tickets played. Top prize is based on highest possible price point played.

Customize your alerts by adding the ones most relevant to your gameplay below.

If you have purchased a Subscription or entered a Lottery promotion in the past year, you are already a member and may login.